The Little Tokyo Utility Box project was developed by the Japanese American Cultural and Community Center (JACCC), the Sustainable Little Tokyo and the office of Council member Jose Huizar. The boxes were used to advance the goal of sustainable neighborhood revitalization and cultural preservation. The project supports the efforts to preserve Little Tokyo's unique cultural heritage.

I was chosen as one of the 10 artists to design the boxes.

My design displays people dancing bon-odori and the stories represented from these fun dances.

Obon is a traditional Japanese Buddhist event to honor one's ancestors and to celebrate life. During the festival, people come together during the summer evening to eat vendor food and dance the night away. People dance using hand motions, fans, castanets (kachi-kachi) and Japanese dancing towels. These dances that exhibit repetitive movement are about celebrating everyday life, nature and ancestors.

As a Japanese-American, I believe that obon is an important tradition that brings people together not only the Japanese/Japanese-American community, but also brings people together from other communities. Obon is a unique event that trancends across multiple generations, races, ethnic groups and religions. During the dances, one does not have to be a professional dancer; anyone can dance these simple dances. 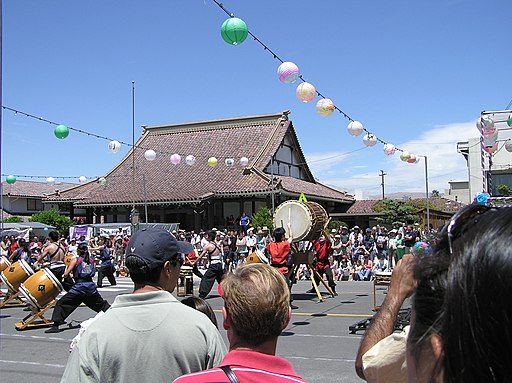 The imagery coming out from the fan depict obon dances. The image of people mining coal represents "Tanko Bushi", the sakura tree and the flowing petals represent "Sakura Ondo", the waves, fish and fisherman represents "Hokkai no Abarenbo" and the old woman pointing a finger represents "Motainai." The image of gravestones in the background represent how people dance to thank our ancestors and honor those who have passed away. During this time, it's customary to go to the cemetary to pay our respects to our ancestors.

Originally, I painted the utility box, but there were setbacks during the process. There were communication issues, so I was not told that the box I was painting was going to replaced in a few months. I stopped painting and waited for the box to be replaced. Rather than painting again, I decided to print my design which wraps around the box.